← back to
Whirlwind Recordings
Get fresh music recommendations delivered to your inbox every Friday.
We've updated our Terms of Use. You can review the changes here.

'The Poets Tale' - Live in London 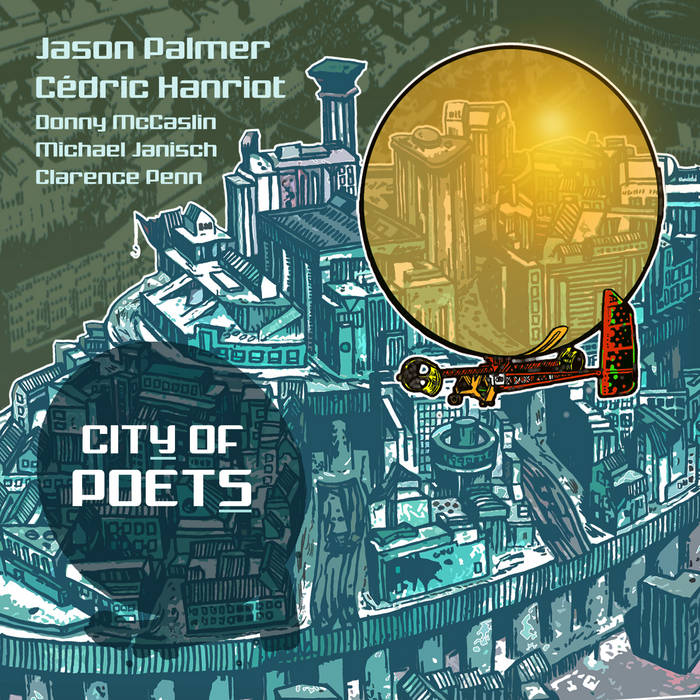 Tracks 1, 2, 3, 5, 7 by Jason Palmer; tracks 4, 6 by Cedric Hanriot
Music composed using the 7 Modes of Limited Transportation by Olivier Messiaen and inspired by Hyperion by Dan Simmons

The very essence of American trumpeter Jason Palmer and French pianist/composer Cédric Hanriot’s improvisational concept City Of Poets – centered around Olivier Messiaen’s 7 Modes of Limited Transportation and US author Dan Simmons’ acclaimed, four-novel science fiction series Hyperion Cantos – is sufficiently intriguing to prompt further exploration of its background and, indeed, the artistic collaboration and musical output it has inspired.
A French/American jazz exchange project (in association with the French-American Cultural Exchange and Mid Atlantic Arts Foundation), its overarching melodic frameworks are based on Simmons’ literary themes of pilgrimage and the life stories of his prominent characters – hence these varied ‘tales’ from The Priest, The Soldier, The Poet, The Scholar, The Detective and The Consul, as well as mysterious four-armed, semi-organic creature The Shrike.

Writing for quintet – completed by colleagues Donny McCaslin (tenor saxophone), Michael Janisch (double bass) and Clarence Penn (drums) – Palmer and Hanriot chose to restrict themselves to Messiaen’s seven modes, each of which are defined by differently shifting degrees/intervals (though always symmetrical and each sharing the same beginning and ending reference point). Once the melodic structure was in place, Palmer explains, the harmonic and rhythmic content for each of the seven tracks arrived quite easily: “It was quite an exercise in creative periphery, the art of taking in literary work and creating musical work simultaneously.”

Launched in 2014 and emphasising its cross-cultural ethos with concerts and masterclasses in the USA, UK and France, the work has taken on an energy of its own at the hands of these stellar improvisers. From the colourful, two-horned vibrancy of 'The Priest’s Tale (Mode II)' to dusky piano/bass blues 'The Detective’s Tale (Mode VII)', this is music which shrieks spontaneity and whispers the work of imagination, reflecting the creative, cultural roots of both its inspirers and realizers. Percussively piquant 'The Shrike (Mode I)' revels in Palmer’s blistering trumpet extemporisations, whilst Michael Janisch’s supple, effected bass enhances the mystery of 'The Scholar’s Tale (Mode III)'. 'The Soldier’s Tale (Mode IV)' swings coolly to Hanriot’s pianistic deftness, and the broad landscapes of both 'The Poet’s Tale (Mode V)' and 'The Consul’s Tale (Mode VI)' throw the rich fluidity of McCaslin’s tenor into the spotlight.

This recording, captured before a receptive, live audience at London’s Pizza Express Jazz Club, expresses all the intended fervor and vigor of this original music and the excitement and freedom emanating from the quintet’s sparky invention. To put a musical slant on the words of English philosopher Bertrand Russell, quoted in Dan Simmons’ Hyperion: “Language serves not only to express thought but to make possible thoughts which could not exist without it.”

"City of Poets is rich, fresh and vibrant and the standard of the playing exceptional... This is music that simultaneously manages to be both highly intelligent and highly exciting."
★★★★½ The Jazz Mann

"The live sound production is of a high quality and resonates with the live atmosphere."
★★★★ Jazzwise Magazine

"Excellent compositions, outstanding solos and a band of internationally renowned musicians performing on absolutely top form."
★★★★ All About Jazz

“The quintet’s sound harkens back to the heyday of hardbop, with bluesy, swinging beats and ebullient solos—only these guys demonstrate just how high the bar for improvisational vocabulary has been raised over the intervening years.”
The New York City Jazz Record

" Simultaneously manages to be both highly intelligent and highly exciting... A musical image that you’ll wish to look at and listen to time and time again."
★★★★½ The Jazz Mann

"City Of Poets beckons the listener to activate their imagination, challenging them to combine multiple art forms, see characters come alive and invent their own informed storyline."
DownBeat Magazine

"It must have been an electrifying date to witness first hand, but the good news is that power and excitement is well conveyed by this recording."
The Jazz Breakfast

"The band are absolutely at the top of their game... outstanding set."
Jazz Views

"Extraordinary melodic, harmonic and rhythmic beauty... City of Poets is not just fascinating, it’s to die for."
JazzdaGama

"Forceful and joyous and plump with harmony."
CapitalBop

The Whirlwind Artist Page for trumpeter and composer Jason Palmer.

Bandcamp Daily  your guide to the world of Bandcamp